Coming soon to a cinema near you...

Somehow we managed to blag the promoter of the Ouseburn Festival into letting us DJ before and after a Peruvian Pan Pipe Band and some dubious Indie efforts. It was a red hot day, the Punk IPA was flowing and somehow what we played seemed strangely appropriate...happy days!

We met this cool lady who stood watching the records spinning around and then told you what they were...

Here's a little mix by Sinister Glove inspired by the summer festivities and their family friendly ways.

A fantastic night that not only boasted a body rocking live set from Rephlex legend DMX Krew but a real stormer on the Electroid/Technoid tip from Glasgows Soundex Phonetic. Improved sound and bunch of new DJ's kicked this night up a few gears for us. Props to everyone who played, helped out in some way or made it down to party...you guys rock!!!

Soundex Phonetic is another cool Glasgow dude and has a number of digital releases available through Paul Blackfords excellent Militant Science label, he also released a corking 12" on Pomolo Records under his god given name of Steven Patton.

He's also a shit hot DJ and was thoughtful enough to record a special Body Melt mix just for us without even being prompted, what a guy!

We didn't ask Ed what kid of set he was going to play until on the night but we were quite chuffed when he replied "pretty much just hard Techno"...wahey! He was armed with some kool kit, a Roland TB-303, FX, Akai MPC 100, Laptop, and a Microphone for his live vocals which got the crowd going bezerkahz. The night looked pretty sweet visually thanks to Edmx's custom visual show and a cool little shop in Sandyford that sorted us out with a number of buzzin lazers and disco lights. Rave essentials!

Ed kindly let us put a sample of his live set from the night up on our Mixcloud so you can either reminisce or wonder why you weren't there in the first place!
DMX KREW - Live @ Body Melt 2:The Meltdown 17/06/11 - Excerpt by Body Melt on Mixcloud
Posted by Body Melt at 10:03 No comments: 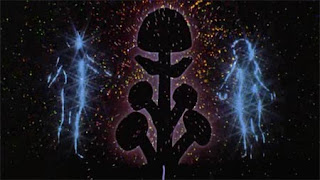 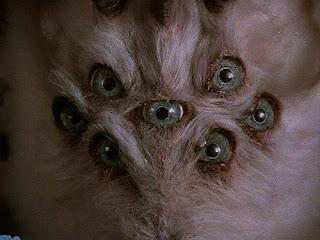 Here is a Mix by Mike Vest from Bong done for the Holy Mountain cinema room at Body Melt, if you've been you'll know drill, if not this is kind of stoner drug addled blasphemic cinematic madness that is going down.

"Aye, cant remember what i added
Kilslug and some other things..
Cheers like..
Mike"

I originally tried to upload this to soundcloud but it got cock blocked by Soundclouds copy write radar,"may contain content that is owned or administered by ABKCO (US) (Alejandro Jodorowsky, Trance Mutation)."...busted by Jodorowsky.

So I jumped ship to Mixcloud where they don't appear to care about that stuff.


Usurper Pancake Manhattan - Where We Go When We Leave - Holy Mountain mix by Body Melt on Mixcloud
Posted by Body Melt at 03:57 No comments: 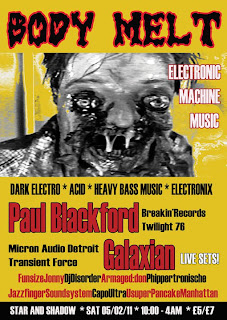 =
Our innaugral event at the star and shadow featured the fast paced Electro Bass sounds of Paul Blackford (Breakin Records/Militant Science) and alien Electro/Techno experi-mentalist Galaxian (Last Known Trajectory/Transient Force) rocking out some serious live electronic shit!
Paul Blackford - Germ Warfare
Paul runs his own digital label called Militant Science which as well as serving as a vehicle for his own releases boasts some outstanding work from the likes of Soundex Phonetic, Chordata, Galaxian, Oort Cloud, Radioactive Man, Ali3ns3xtoy, Epsion and it's all free to download so get'pon dat shit!
http://www.militantscience.net/
Galaxian - Pancake Wednesday
Galaxian hails from Glasgow and is something of an enigma musically speaking with a style that doesn't sit comfortably in anyone genre. Elements of Techno, Electro, Electronica, and Noise music collide in a kind of musical alchemy which produces something which is entirely his own without being a an overly self conscious exercise in jumping from one style to the next. Find out more at...
http://www.lootingofreason.com/
The night was a total sellout we had lazers, strobes, moonlights, and projections in the main room.The Electro/Acid/Braindance/Electronix sound was being fully rocked out and represented with only a couple of deviations that didn't quite fit what we were after musically( I'm mentioning no names ;) ). The sound on the night was a bit too loud for some and admittedly it was a bit too loud for us as well in hindsight. To be fair that was my fault I booked a 10k rig that was probably a bit OTT for the size of the room, most of the extra power was bass blasting people full on in the face...it's all anarchy though innit?  We've nailed it out now though so it's all good, you live and learn ay kids?
The Holy Mountain Room in the cinema featured DJ's Mike Vest from Bong, Ben Jazzfinger from non other than Jazzfinger operating as Jazzfinger Soundsystem, Capo Ultra who normally rocks out stuff on the Urban Music tip, Phippertronische from Road to Rimini, and Richard Dawson sitting on a stage playing a Bassoon. Music in there was completley random and on a total wtf? urgh hallucinatory mind fuck trip. Visuals on screen were assembled from loads of fucked up films and assembled by the big man himself Max Lermontov.
In the foyer area Glu Flux Klan provided "A Sojourn in the City of Newcastle, in the Year of Our Lord 20--" an art experiment which featured a live one man surf noise band, a man riding a bike watching the Tour de France on a telly whilst listening to Kraftwerk - Tour de France in a loop for two hours, as well as a number of well placed projections.
.
So all in all it was a triumph of content and substance over style...what more could you ask for? What? What? all of Galaxians live set in it's entirety? Oh...oh...oh well go on then.
GALAXIAN LIVE BODYMELT 05-02-11 by Galaxian on Mixcloud
Respect and thanks to all involved...big up the Star and Shadow!!!
Posted by Body Melt at 09:43 No comments: 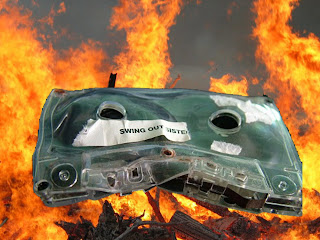 No mixing techniques or tapes were involved or harmed in the production of this mixtape.

Email ThisBlogThis!Share to TwitterShare to FacebookShare to Pinterest
Labels: SoundCloud

Body Melt will be bringing to the masses Electronic Music PARTIES/RAVES that focus on live knob twiddling button bashing banging sets by top artists and producers from the UK and Europe. Over two rooms our far reaching music policy ranges from:

Room 1 (Body Melt) Underground Electro, Acid, Braindance, Electronix, Industrial/EBM, New Beat and any other kind of electronic machine music beyond or between that, that gets us and the floor worked up.

Our main aim is too throw raging parties for people who want to give theimselves up to to the beat and the moment, driven forward by exciting forward thinking producers who aim to set your body and your mind into overdrive.